A few tips from Monika on how to kick off the new year! Monika shares three tips on how to get motivated with three tools you can use to strategize, plan and achieve success as a creative entrepreneur this year. This podcast episode is sponsored by Sandra Flora Design. Check her out for your home design needs at:
https://www.sandraflorahomedesign.ca

Listen to the full episode on Spotify here: https://open.spotify.com/episode/3XFWFbFQVn5bQa1RhBktcR

CHeck out our latest episode of The Art World Podcast with Magda Major from Mox Foods!

I interview Magda Major from Mox Foods, Mox Ice Cream and Mox Group. A multi-talented entrepreneur, Magda shares her wisdom and her expertise in everything from product creation, scaling her business, and how to be flexible while being outside the box in business from her perspective as a business consultant in the food industry.

This episode is full of amazing wisdom and practical content that any creative entrepreneur can apply in their business!

I hope you enjoy!

For all your North and West Vancouver cleaning needs, call DC Cleaning today!

Welcome to our art family A Feather and a Stone. We are so looking forward to you being part of both our Christmas and Spring shows in Vancouver this year!

Let’s give Sheena some love everyone!

Growing up on Vancouver Island, Sheena Francis Olito has always found inspiration in the beautiful west coast rainforest. The ocean, rivers, and grand forests provide a calming and relaxing atmosphere for creative inspiration. As a First Nations artist, it is no surprise that her designs use natural elements like sterling silver, amethyst, moonstone, and turquoise.

Sheena had always known she wanted to be an entrepreneur. After high school she obtained a Business Diploma with Entrepreneurial focus and set out into the world. After meeting renowned artist Clarence Mills she rediscovered her love of making jewellery and enrolled in a Metal Jewellery Design program at the local college.

Today you can find her creating in her studio on the unceded territory of the Quw’utsun people. As she continues to expand her skills designing jewellery, you can view her evolving journey on IG @afeatherandastone

Sheena is of Southern Tutchone and Scottish descent. She belongs to the Kwanlin Dun First Nations in Whitehorse, YT. Having recently connected with her mothers biological family, she has discovered she comes from a long line of matriarchs belonging to the Wolf clan. She is eager to learn more about the culture and traditional teachings of her ancestors.

“To help people seeking motivation to fight eating disorders, such as those leading to obesity”

In this difficult historical period, in which society is burdened by war, economic crises, and climate change, psychological discomforts have greatly increased. Moreover, the situation has been aggravated in the last few years by the COVID pandemic and the harsh rules put into action to fight the spread of the virus: society seemed to be so focused on the emergency situation that it ended up building around it a model of living based on the new rules and encouraging a constant narrative of what is happening.

Among these restrictions, social isolation and the inability to engage in physical activities have worsened the situation of many people suffering from eating disorders, obesity in particular. Of course, the best choice to deal with all these problems is turning to medical or psychological specialists, but sometimes people are not motivated enough to contact them. That’s when different groups independently started to think that art could be the right tool to make a positive change in society.

Let us try to explain this hypothesis, formulated by several groups independently, in a clear and organic way:

– The goal of the project “ONLY ART WILL SAVE THE WORLD” is making art known and valued in today’s difficult society, and to spread it as a tool for healing the rift between many people’s inner world and the outer reality.

– The project “ONLY ART WILL SAVE THE WORLD” also recognizes painting and sculpture as a branch of the Hermeneutic Philosophy. This means that art is recognized as having the ability to reveal ourselves and the world around us, according to the interpreatation of the modern hermeneutic current by the philosopher Heidegger.

Dr. Matteo Bertelli also remarks that “the order of the external world, created by Renaissance architects and sculptors in Italy, is reflected in the internal world of the individuals, leading to their well-being.”

Dr. Bertelli believes that Italy is one of the best places to live, both because of the Mediterranean diet and because it is the homeland of Renaissance-era architects, who captured perfect proportions and designs that led to the construction of the capital cities, where most people live even today.

MAGISNAT is driven by the idea of science meeting art for collective welfare. In conclusion, art and the Mediterranean diet, as well as science and research, can powerfully merge together to lead people around the world to better health.

Artists and associations who would like to contribute to the realization of this project – the idea is to organize exhibitions and lectures on the topic of the effect of art on our well-being – can email Dr. Bertelli at info@magisnat.com

We are thrilled to announce that after a long few years, our events are back! Our Vancouver events are booked and we are working on our Victoria, BC and Edmonton, Alberta event date confirmations. We are looking forward to seeing you all again!

If you would like to participate as a vendor, please visit: https://theartworldexpo.com/exhibitor-information/

We have booked our annual Christmas Fair for December 2 and 3 at the Polish Friendship Society in Vancouver and our 10th anniversary event at the Pipe Shop at the Lonsdale Quay for March 31, April 1 and 2, 2023.

Sponsorship and advertising packages will be available soon.

Our 10th annual year hasn’t exactly come as planned, but we are not going to let any hiccups stop us from celebrating 10 years of our awesome event!

Over the next few weeks, we will be hosting some awesome initiatives, promotions and online events to celebrate this milestone and we hope you can take part!

MMC CRAFT is a creative studio specializing in metal wall tiles and wall art that will remodel your space. We design and manufacture decorative metal and cooper accessories for interior design including tiles for Kitchen, Stairways and Fireplaces.

Every wall piece is one of a kind. We make handcrafted and unique tiles that are much desired in a world of mass production. Metal or copper finishes will always look stylish and will make a great visual impression in your kitchen. Metal tile will age slowly over time and that makes our products more special, elegant and rich looking. Our backsplash tiles come In different styles: Accent, Artisan, Celtic, Mosaic, Rustic, Wood look.

It’s been rainy in Vancouver, yet Vancouver Florist has some amazing flowers to help you beat the rainy day blues! If you are feeling like you need a pick me up or if you’re looking for flowers for your special occasions this season, be sure to check out this florist!

They offer delivery or pick up for birthdays, anniversaries, celebrations of life, sympathy or get well flowers! In their Kitsilano location, they display a large line of fresh exotic flowers, red roses, Christmas flowers and best quality orchids for any occasion. Be sure to check them out for your next flower order!

Tell us about who you are and what you do? What’s your company name, when did you start, what are your main services and goals as a business owner? 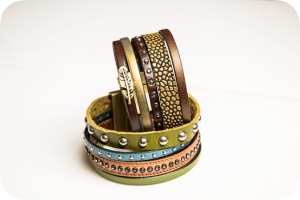 I started Blissbeads in 2003 after participating in a three hour glass bead making class. I hand make glass beads using a torch fed by oxygen and propane. Blissbeads then go into a kiln where they are annealed for durability. After they reach room temperature they are thoroughly cleaned and ready for the next phase…Jewelry! Developing colour combinations and custom blending new hues, melting glass to its fluid state and manipulating it to form a new, luscious form excites me every time I light my torch. I feel that Blissbeads style is not easily defined. A client once described my designs as Feminine and Unforgettable…I love that description because I feel it reflects my intention as a designer and my feeling that each one of us is uniquely individual. This viewpoint inspires me to design wearable works of art and the lovely human is the canvas they adorn.

I design collectible one of a kind jewelry and commission pieces. I have been blessed with the privilege of designing for special occasions like Weddings and Anniversaries, corporate events, sentimental gifts and Memorial Beads containing cremains of loved family and four legged family. Customer service is key and it looks much different now that I am unable to meet face to face with guests.

Art World Expo’s 10th Anniversary is postponed this year due to the COVID19 global crisis. What do you normally offer when you are at a trade-show and how are you reaching new customers without being at trade shows this spring?

At shows I offer pieces made specifically for the event, loose beads for designers and whenever possible I accommodate adjustments and custom same or next day service.

Have you introduced new products or services during this time so that customers can still shop with you?

This season I designed a new line of Boho Glass/Leather Chokers that are ageless in their appeal. They pair beautifully with my multi strand leather bracelets featuring magnetic clasps. When it comes to commissions there are lots of photos going back and forth by text so the details of my designs are exactly what the guests desire. It is a very collaborative experience.

Lots of artists thrive in self induced isolation! Would you say that you are an introverted artist and enjoying this time or are you an extroverted one who is missing the hustle and bustle of events and people?

I really do enjoy my quiet, creative time…however I’m missing meeting collectors and ultimately seeing my creativity adorning them. That aspect really revs me up. 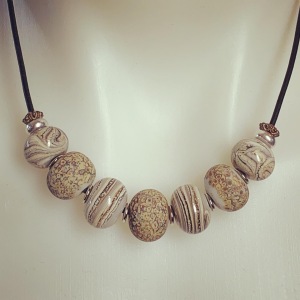 If you could give other creative entrepreneurs a tip right now, what would you tell them?

On a personal note I have been a Hairstylist for 36 years…my world has been very hands on people. My husband and I closed our brick and mortar businesses and sold our home in September. We sold most of our possessions and moved into our fifth wheel. We left our home town and headed on down the highway to Fort Langley. The plan was to spend the winter and then embark on a cross Canada tour. Music and Blissbeads…the Live and Kickin Tour…well thankfully we are “Live

and Kickin” but the tour is on hold. So we are staying put until…no definite plan…for two people who are pretty accustomed to a plan. My husband is a professional Musician so we are two creative humans anxious to share what we do with others at markets and venues across our beautiful land and surround ourselves with the diverse cultures from West to East.
For other creative types…dial into your creativity to tune out the crazy…I have been posting a lot more on Instagram (blissbeadscanada) which has connected me with many new followers and other artists. Introduce a new skill to what you

already do to keep your brain fresh. Stay connected.
And like us…continue…being creative♥️